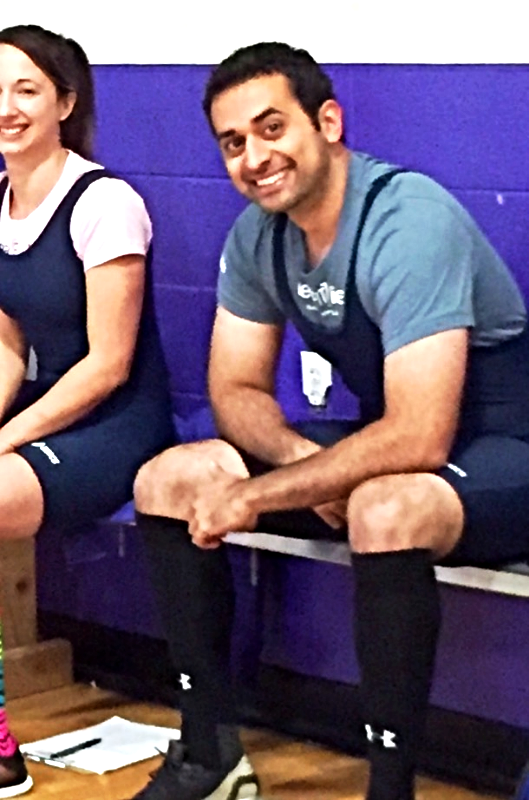 For five of our team members, this was their first powerlifting meet experience, and they all did an amazing job.

Each day this week, real [FIT] life will feature one of our team members, their stories, their struggles, and their amazing successes.

So be sure to check back tomorrow and every day this week to learn more and to be inspired by everyday real people just like you!

To learn how to bring out your own inner athlete, be sure to read our recent real [FIT] life newsletter topic, “Do you believe you can achieve fitness greatness? (you should)” Click here.)

A little info about PJ

PJ is one of real [FIT] life’s newer members. He came to us this past April and at the time of this meet, had only been lifting for 19 weeks. When he started our program, his main goal was to put on muscle and to gain some size and strength. He also wanted to place a strong focus on technique and was willing to take his time progressing to ensure he learned to do things the right way. Since that is precisely how real [FIT] life progresses all of our participants, he was a perfect fit!

PJ was a true beginner when he started as his only current activity involved running but no lifting. We started him with the basics, using mostly bodyweight in the beginning and gradually progressing to bars, heavier dumbbells, and more challenging exercise variations.

As with most people, we needed to spend a lot of time working with PJ on his spinal alignment during movements, especially his hinge pattern. His back had a tendency to severely round and his pelvis would also pull forward.

Because PJ was so commited to learning how to properly correct these issues, we were able to progress him along fairly quickly.

In addition, to better reach his personal goals, PJ heeded my advice to take fuller rest periods between lifts, to be able to lift heavier each set. He also started to improve his diet by eating more protein and more food, overall.

The change in PJ’s physique has been noticeable even to his coworkers, who almost immediately saw a difference in the broadening of his chest, arms, and shoulders.

Something I did not know about PJ until much later on, was that he had incurred a serious injury to his back in 2011. He later told me, he was in a grocery store, bending over to get something off the shelf when his back just went. He says he was in so much pain, other people in the store had to help him to stand back up. At only 24 years of age, he had to take a full week off from work to recover.

Well, jump ahead to PJ’s performance this past Saturday, and you would never know he was someone with a prior history of back problems!

With only 19 weeks of training, and no real prior lifting experience, PJ’s accomplishments were quite commendable. He had only started to learn to bench press about 12 weeks prior, and had been deadlifting with a bar, from the floor, for even less time. As I had mentioned, we’d been working on fixing his hinging pattern.

PJ’s bench was showing great promise as he had already worked up to 120 lbs for 6 strong reps, and every week we were adding to that.

As for his deadlift, I have to say that was a definite surprise. Prior to the day we tested his single rep max, the most he had pulled was 175 lbs for 6 reps.

On the day we tested PJ’s max pull, the bar just kept flying off the floor. We worked PJ up to a 290 lb deadlift that day. I wanted to get him close enough to 300 lbs so he would have the confidance to pull that much at the meet, but did not want to overtire him either.

We were all really excited for PJ, and so happy to see how far he’d come in such a short time. PJ was pretty excited as well!

PJ’s bench attempts went just as planned. In training, his max bench had been 165 lbs, so we planned that for his second attempt and something slightly heavier for his third. I wanted to ensure PJ aced his 165 before trying anything heavier. Although his 165 bench had been solid, he only had pressed it once before, and his body was still acclimating to higher bench numbers.

PJ benched 165.3 lbs for his second attempt beautifully. When he came off the platform he told me it had felt heavy, so we stayed modest for his final attempt, and only went up to 170.9 lbs.

PJ did not complete his final lift that day, but the fact that he had benched a solid 165.3 lbs with so little experience handling heavier weight, says volumes about what he’ll be capable of with more time under the bar and more training with heavier loads. He’s just getting started.

Like I said, PJ surprised all of us, and himself, when we had tested his deadlfit max in training. At the meet, his first pull went up so easily that PJ almost tipped backwards,

His third attempt went up equally well. We had two potential numbers selected for his third attempt, and as I had explained to PJ prior, depending on how heavy his second pull felt, would help us determine which number to go with.

After pulling PJ stepped off the platform and I asked him how it felt. He said it felt pretty easy. We decided to go for the heavier option of the two, 308.6 lbs, for his final lift.

As you can see, PJ did awesome. We were all so happy for him, including me.

After the meet, PJ texted me to tell me he was disappointed that the weekend of the next local meet, in January, is a weekend he has to attend his MBA program. (PJ is another committed fitness attendee who works a full time job AND is attending a weekend MBA program.) I assured him that there will be plenty more meets to enter.

In the meantime, PJ will continue to work on his lifts in training. We all look forward to watching him get even stronger.

PJ won the silver medal in his weight class.

Be sure to check back tomorrow, when we’ll feature another one of our real [FIT] life team members and their meet results!

If you enjoyed this and found it inspiring and useful, then join our real [FIT] life community! Sign up for our FREE real [FIT] life newsletter (at the top of this page) today!